There are now 2 ICOs promising to bring tickets on Ethereum and I have to get something off my chest. I am following both projects as I am very interested in the topic - but I am seeing big problems with both of these ICOs. My biggest problem is with aventus as they assume the only way to fight ticket scalping is to bind identity to the tickets. My main concern with this is a privacy one. I do not want to live in a world where tickets on the blockchain have a connection to the identity of the participants. But I think there are also operational problems - Imagine at busy events that not only the QR-Code has to be scanned - but also your identity has to be checked. I think this will add significant time at the door and just be an inconvenience to users. Sure they will counter that this can be solved with automatic face-recognition at the events later on - but this is a dystopian future I do not want to live in and I will fight where possible.

Also I think another way is possible. Instead of bossing around users so they cannot easily resell their tickets in order to prevent ticket scalping - why not try to give the tickets to the right users/fans in the first place? This can be possible with emerging services like ujo music or resonate. Ticket-scalpers just will not have the right keys. Sure it is not possible right now - and so you might miss the opportunity for an ICO (as at this point people might have realized that most of the money flowing in them is just gone without any return) - but I think it is worth the wait. This is also why I now concentrate on WALLETH and not push esPass as I think we need some basic infrastructure like light clients or services to identify fans first before we can have good ticketing services on Ethereum that work for and not against users.

For all that still want to invest in these ICOs - I urge you to do deep due diligence - there are so many red flags in these ICOs that I am really surprised they already collected that much money.

Writing “provably secure” there shows how much they know about security. Security is a process not a product! And even crazier to say something like this when you can’t even get the crowdsale contracts correct. Really reminds me on how coindash acted

I think most of the money will just be used to party: 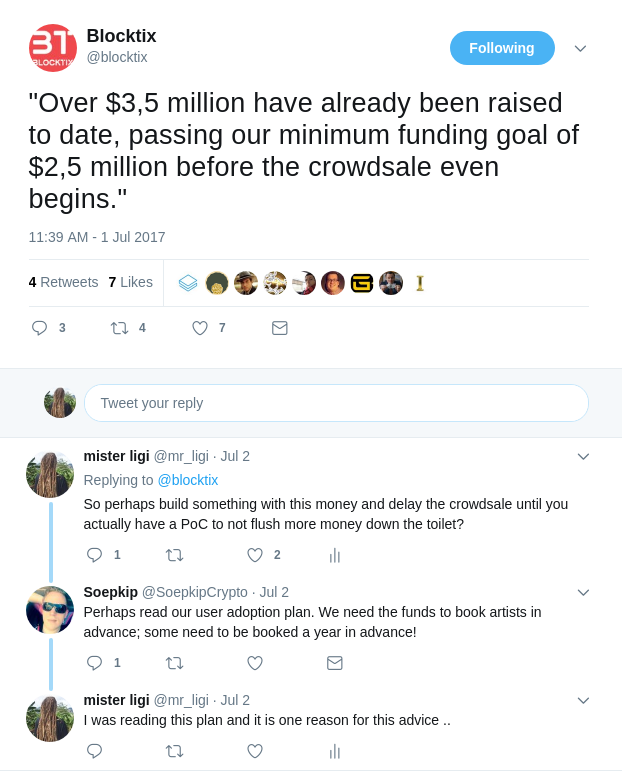 Don’t get me wrong - I like a good party ;-) But I think it is wrong to collect money promising returns and then use it to Party. I think we should start with tech-conferences - hellosugoi is a good example there. I don’t think the Ethereum ecosystem is yet ready for users outside tech to be honest. The time will come - but it is not yet there - and I think before it is there - both ICOs will have burned through all the money they got and just be gone. And in the worst case they even leave a bunch of disappointed users behind that think “Uh - these blockchain tickets where really annoying”.

Timing is very important - often even more important than the idea or the execution. I still think tickets on Ethereum are the future - but we have to get this right! And I am very positive we can solve also ticket-scalping that way in the future. I have seen this at 33c3 - where there was huge demand for the tickets - but by using a token-system (not on the blockchain but with the great pretix project) - where tokens where going to e.g. hackerspaces and helpers of previous events to prevent ticket-scalping and get the right crowd to the event.